The future of hotels is touchless.

Yani Deros was on the brink of launching a robot for luxury hotel rooms when the pandemic hit. The product, CIRQ+, is an autonomous robot bringing personalization into “hotel rooms of the future,” as Deros put it. CIRQ+ streamlined the hotel room experience for guests, automating the temperature, lighting, and other room specifications to each guest’s preference using occupancy sensors and voice controls. He was set to implement and deploy CIRQ+ at major hotel chains—certain Element Hotels, Jumeirah Hotels & Resorts, and Radisson Blu properties, to name a few—before COVID-19 abruptly brought travel to a screeching halt in March 2020.

Deros said his choice in the early days of the pandemic was clear:

“We could’ve sat back and tried to ride it out, but because we’re technologists and innovators, we decided to take on the challenge of developing a solution that can sterilize a guest room or classroom or public area without any manual labor.”

So, he created CBOT—in eight weeks. At the end of May 2020, about three months into stay at home orders, Deros had a concept for an Internet of Things (IoT) robot and use of a vacant wing at the Arizona Grand Resort in Phoenix for further research and development. Eight weeks later, they debuted CBOT, an autonomous robot that can clean hotel rooms with hospital-grade sterilization products and without the assistance of hotel staff.

Related: What Does the Future of Luxury Travel Look Like in a Post-Coronavirus World?

Deros, of course, wasn’t the only one charging full speed in the direction of sanitization. In fact, April, May, and June 2020 brought a sanitization frenzy in the hospitality industry. Delta started using antimicrobial bins to reduce the spread of germs at major airports’ TSA security checkpoints and instituted electrostatic spraying on all aircrafts. Hilton debuted Hilton CleanStay across their 18 brands, with luxury properties like The Beverly Hilton rolling out Xenex UV LightStrike Robots to do a COVID-19 particle-killing sweep before guests entered their hotel rooms. And many major hotels introduced sanitization policies with mask mandates, branded sanitizing stations, and HEPA filters.

Less than 100 miles from where Deros ran tests on his autonomous sanitization robot, Adam Ross was in talks with DeCurtis Shield to bring their robot-like check-in system into his luxury wellness resort. Ross, co-founder of CIVANA Wellness Resort & Spa, comes from the tech world and was one of the first in hospitality to jump on innovation like DeCurtis Shield Kiosks, which take every guest’s temperature (with extreme accuracy) upon check-in, checks every staff member’s temperature daily, and can help contact trace in the event of a guest testing positive for COVID-19.

Protecting guest’s health—especially at a wellness resort—is paramount. And for Ross, he wanted guests to feel safe both physically (health-wise) and emotionally. His take? Dealing with COVID-19 is mentally taxing and making people feel emotionally unburdened is crucial when building a luxe wellness space.

Ross saw tech as a way to bring that health and safety to the resort, but he and his business partner also grappled with the notion of relying on technology, while asking their guests to unplug.

“We don’t want people using technology when they get here, we [try to] get you to take a break from it. But on the other hand, we want to leverage technology as much as possible to make everyone’s experience better. So it’s walking that line,” explained Ross.

The technology at a leading hotel needs to be cutting-edge but thoroughly unobtrusive, so it makes guests’ vacations safer, without detracting from their experience. At CIVANA, there are clearly HEPA filters in all the spa treatment rooms and a DeCurtis robot greeting guests in the main lobby. And to achieve their safety goals, there’s no getting around that. But Ross and his team have taken great care to integrate DeCurtis into the expansive lobby, nestled next to the exposed wood check-in counter, opposite white-washed walls, a roaring fireplace, and desert views. What’s more, they’ve leveraged DeCurtis as a way to bring clients the inner peace and security they crave amid COVID-19.

George Poste, who not only served on the Defense Science Board—which advises the Secretary of Defense and the President on relevant developments—but oversaw vaccine development for decades at leading pharmaceutical company GlaxoSmithKlein, told Departures that these innovations, from DeCurtis to CBOT, will stay relevant even after a vaccine is widely distributed.

“This isn’t going to be out of sight by the end of 2021,” said Poste, now regents professor of health innovation and a scientist at Arizona State University. “There will still be flare spots with a vaccine in 2022. And that assumes that the [virus] is stable and not mutating, rendering vaccines ineffective.”

His take on the effectiveness of these tech innovations is, essentially, that the better the tech, the more precision you’re getting when protecting guests from the spread of COVID-19. This echoes what Ross suggested when bringing in DeCurtis—he didn’t want just any thermometer device, he wanted an autonomous agent that would be accurate every time.

Deros’ CBOT brings accuracy front and center: it’s eliminating human error altogether. With UV-C cleaning devices, Deros pointed out, spots that the light doesn’t hit are occasionally missed. And a member of the housekeeping staff still needs to bring the device in and out of the room.

“[CBOT] has the great advantage of using very smart programmable robotics, and the ability to design different configurational capabilities into the robot depending upon what type of area you’re trying to spray—hotel rooms would be one, restaurants might be a different one, and so forth,” said Poste. “[And] the material being used to spray has been well known in hospital infection control.”

Looking at the hospitality industry—and the COVID-19 situation on the whole—from a wide-angle lens, Poste hypothesizes that this bot could pave the way for robotic sanitization on a much larger scale. “We’ve been doing some calculations on what the number of drones would be and the amount of time [it would take] to cover an indoor closed stadium, like Cardinals Stadium or Cowboys Stadium,” said Poste.

Poste sees this as not only “a safeguard for both the housekeeping and janitorial staff, absolutely critical essential workers,” but a step toward more thoroughly sanitizing planes, cruise ships, and to go beyond transportation vessels, even nursing homes or restaurants. When he postulates on larger-scale robotics, he’s hopeful that, with CBOT, we could be experiencing the type of autonomous bots that could, one day soon, clean entire subway stations, sports stadiums, and enclosed, high-traffic areas.

“This is classic militarization of advanced automation engineering,” Poste concluded.

About six weeks after Deros and his team took over a few suites at the Arizona Grand (without divulging what they were creating), they unveiled the bot to the resort’s upper management. They were floored. This led to a rollout in mid-September in New York City at Marriott World Trade Center with Glenn Haussman of hospitality podcast “No Vacancy” and Anthony Melchiorri, the star of Hotel Impossible, to thousands of hoteliers from all over the world; not just U.S. properties, but Asia, Africa, Europe, and South America. That launch springboarded them to a Las Vegas event and CBOT gliding across the floors of the Aria, showing off for more hotel general managers from boutique hotels and big-name hotel chains.

“The hotel room of the future is going touchless,” said Deros, simply. Installing a robot to sanitize the space with complete accuracy (and without the help of a hotel staff member) is just the beginning.

Volara Teams with CIRQ+ to Power its New, Multimodal, Voice-Based[...] 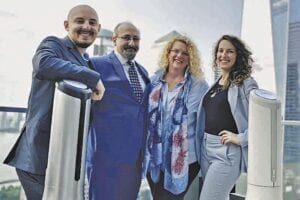 Scottsdale firm’s invention could be a COVID-buster

By Paul Maryniak, AFN Executive Editor As partners in business[...] 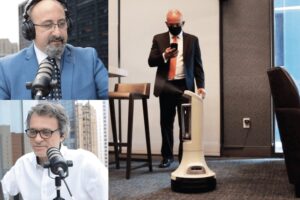